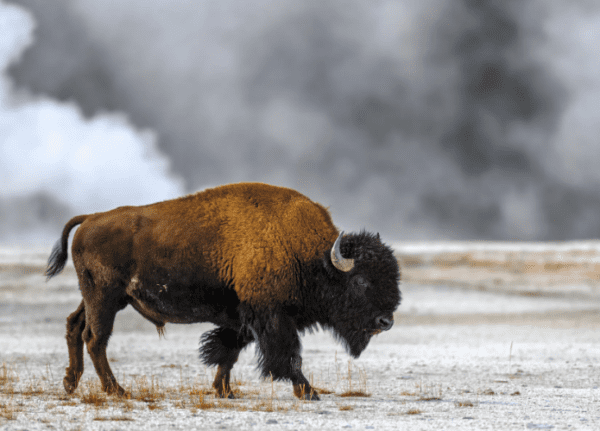 Native American tribes are leading efforts to bring back bison across North America where they were once hunted to near extinction in the late 19th century.

Tens of millions of bison, also known as American buffalo, once lived on the Great Plains of the United States and Canada.

Many Native American tribes needed the animal to survive. They ate the bison’s meat, used its bones for tools and weapons, and made clothing and housing, called teepees, from its hide.

European settlers turned killing bison into an industry. They used animal parts in machinery, fertilizer and clothing. By 1889, few bison remained: about 800 animals in the wild and 250 in zoos and private ownership.

U.S. Interior Secretary Deb Haaland is the first Native American to serve in the cabinet. She told the Associated Press, “We wanted to populate the western half of the United States because there were so many people in the East.”

The thinking at the time, she added, was “if we kill off the buffalo, the Indians will die. They won’t have anything to eat.”

Now 82 tribes across the U.S. have more than 20,000 bison in 65 herds. And that number has been growing along with the desire among Native Americans to look after the animal that their ancestors depended upon for thousands of years.

The long-term dream for some Native Americans is to return bison to the large numbers that once shaped the landscape itself.

Troy Heinert is a South Dakota state senator and director of the InterTribal Buffalo Council. His goal is to get bison to tribes that want them, whether two or 200. This autumn, Heinert’s group has moved 2,041 bison to 22 tribes in 10 states.

He said, “All of these tribes relied on them at some point, whether that was for food or shelter or ceremonies.”

Others have greater desires.

The Blackfeet in the American state of Montana and tribes in Alberta, Canada want to establish a herd that crosses the two nation’s borders near Glacier National Park. Other tribes propose a “buffalo commons” on federal lands in central Montana where tribes in the area could harvest the animals.

“What would it look like to have 30 million buffalo in North America again?” said Cristina Mormorunni, a Métis Indian who has worked with the Blackfeet to bring back the bison.

Haaland said there is no going back completely — too many fences and houses. But her agency has become a primary bison source, transferring more than 20,000 to tribes and tribal organizations over 20 years.

Some cattle farmers are against the plan to move bison. They worry the animals carry diseases and compete for grass. But bison demand from the tribes is growing, and Haaland said transfers will continue. About 1,000 bison were transferred this year from Badlands, Grand Canyon National Park and several national wildlife refuges.

Some tribes are reintroducing traditional ways of harvesting bison. But today few people have the skills to harvest them.

In South Dakota, this October, Katrina Fuller helped guide a group to harvest bison by cutting one into smaller pieces. She dreams of teaching others so more communities can harvest the animals.

Tribal elder Duane Hollow Horn Bear is 73. He said the harvest brings back what was almost totally taken away — his people’s culture, economy, and social connection.

“It’s like coming home to a way of life,” he said.