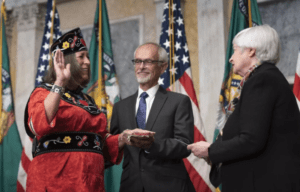 Lynn Malerba, chief of the Mohegan Tribe, is the first Native American to serve as U.S. treasurer. She said her appointment is a commitment to having Native voices heard at the highest levels of government.

“Being in this role is really serving not only all of Indian country but all of our Native nations – all of our Native citizens – but also all of the communities throughout the United States because part of the role of treasurer is community engagement,” Malerba told Connecticut Public Radio’s Where We Live.

Malerba is also overseeing a new Office of Tribal and Native Affairs, which will coordinate tribal relations across the Treasury Department. Malerba said she plans to focus on supporting the development of tribal economies and economic opportunities for Native Americans.

Among the urgent issues she wants to tackle: addressing health disparities. Native Americans and Alaska Natives have been disproportionately affected by COVID-19. Life expectancy for Native Americans and Alaska Natives dropped by nearly seven years during the pandemic, according to federal health data. That’s a larger decline than any other racial or ethnic group in the U.S.